Delicious sour cream and onion keto chips are gluten-free, low carb, and made of real good foods. Great for a keto appetizer with dip, a snack during the big game, or as a low carb side with soup!

PIN it here for later! 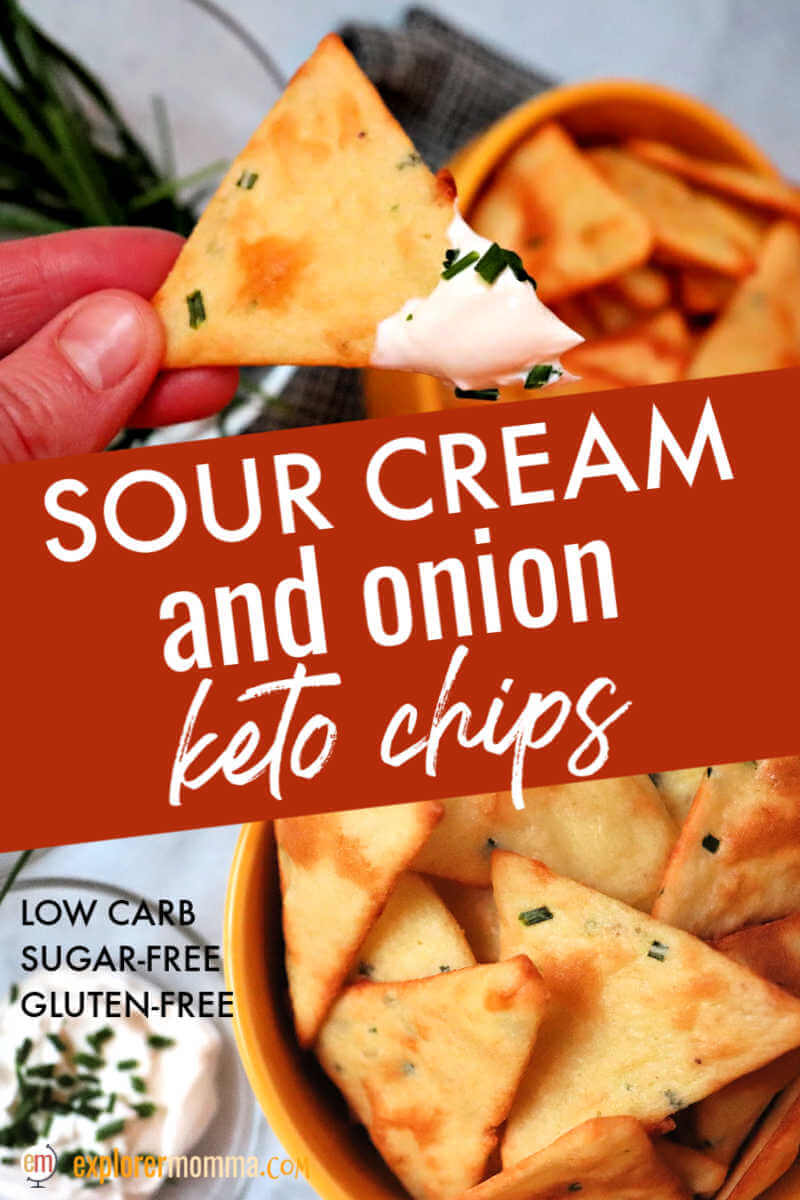 Few things motivate me more to develop a recipe than the wants of my own child.

It’s one thing for me to choose this way of eating for my own health. However, it’s a completely another thing when a doctor tells a young child it would be best if she didn’t eat certain things. Suddenly Mom becomes the police, and those big sad eyes turn up at every party or event.

But I LOVE sour cream and onion chips! Can’t I have just one? Just this once? Puh-leeeease?

Of course, we already know the answer. No. Also, for anyone, is it really possible to eat just one chip?! I don’t think so!

Therefore, that’s how these sour cream and onion keto chips came about. A plea from the child. A desire to keep me sane and offer something she actually likes to grab at parties.

Oh, and I think they’re pretty tasty for a snack myself! 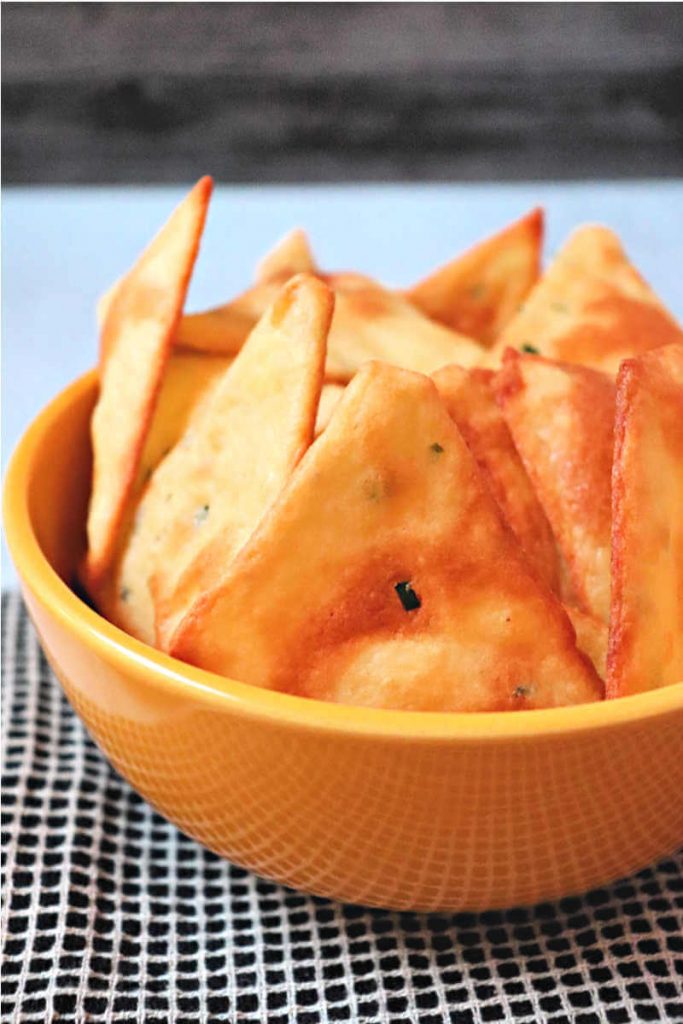 While I think you’ll love my super helpful tips and fun stories, I also realize we are sometimes pressed for time and just need a good recipe!

Scroll down to the bottom of the page for the printable recipe to make it NOW or PIN it here for later!

Reading one book is like eating one potato chip.

Tips for the best keto chips

What do you want in a chip? I’ll tell you what I look for.

First, does it hold together to get a good amount of dip? Second, does it have a crispy crunch when you bite into it. Third, does it have the distinct salty chip flavor, in this case sour cream and onion?

If you want the chips to hold together, my first tip is to mix the ingredients really well. Sounds simple enough, but get that mixer out and whip them together. This is the best way to ensure a solid chip.

Second tip involves the crispy crunch. Roll the dough as thin as you can between the sheets of parchment paper while still being able to remove them to the pan. The thinner the chip, the better the crunch.

Also, when you bake something, especially with almond flour, there’s not a ton of time between getting them crisp and burning the chips. Once the edges start to brown, watch them closely. The middle will start to brown, and at that point whisk them out so they don’t burn.

The browner they are, the crispier they’ll be. I like them not too crisp but with the edges brown. You’ll have your own preference. 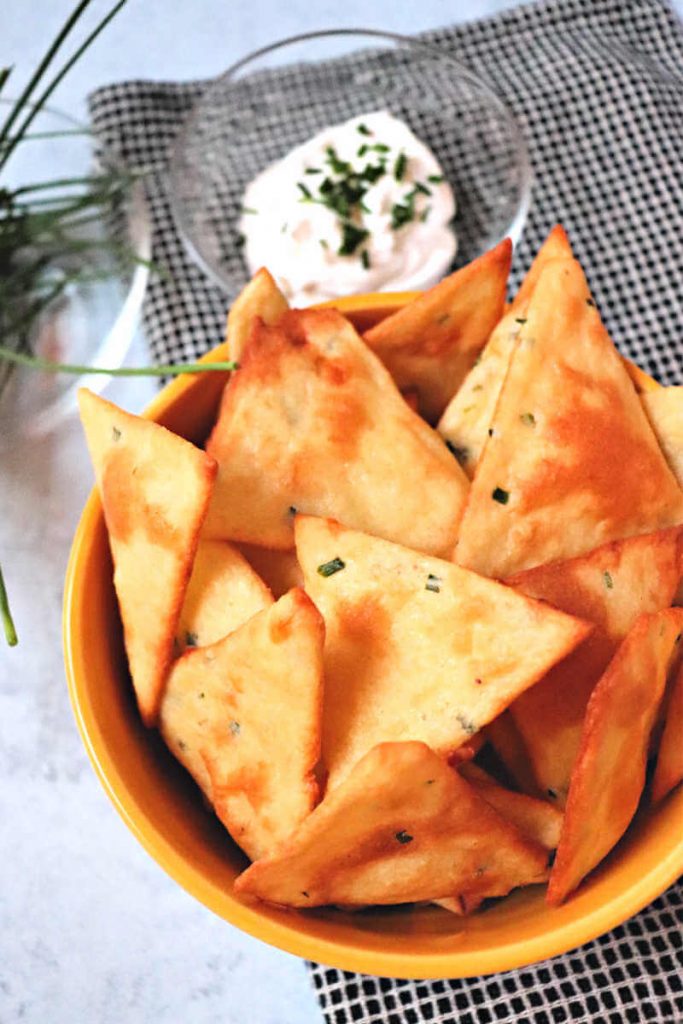 I have a tendency when I feel myself getting stuck, my impulse is to go to my cupboard and find chips to eat.

HOW TO MAKE SOUR CREAM AND ONION KETO CHIPS

To begin, preheat the oven to 350 degrees Fahrenheit and prepare two baking sheets. Line them with silicone baking mat sheets or parchment paper.

To make the chips, first place the shredded mozzarella and butter in a microwave-safe bowl. Stick it in the microwave for 1-2 minutes until the cheese is entirely melted.

Secondly, mix it well with a hand or standing mixer. Then add in the egg and the sour cream, and combine it all well. From there, add the almond flour, garlic powder, onion powder, mustard powder, and salt.

Whip it up until everything is completely combined and a dough forms, or you can push it into a dough ball with the spatula. Now, mix in the chives and place the dough ball in the refrigerator to chill.

How to roll out the keto chip dough

Now to get ready to roll out the dough.

Spray two large baking sheet-sized pieces of parchment paper with coconut or avocado oil. Alternatively, if you don’t have a spray, brush the oil on with a basting brush. The oil serves to prevent the dough from sticking to the paper but also to help the chips crisp up when baking. 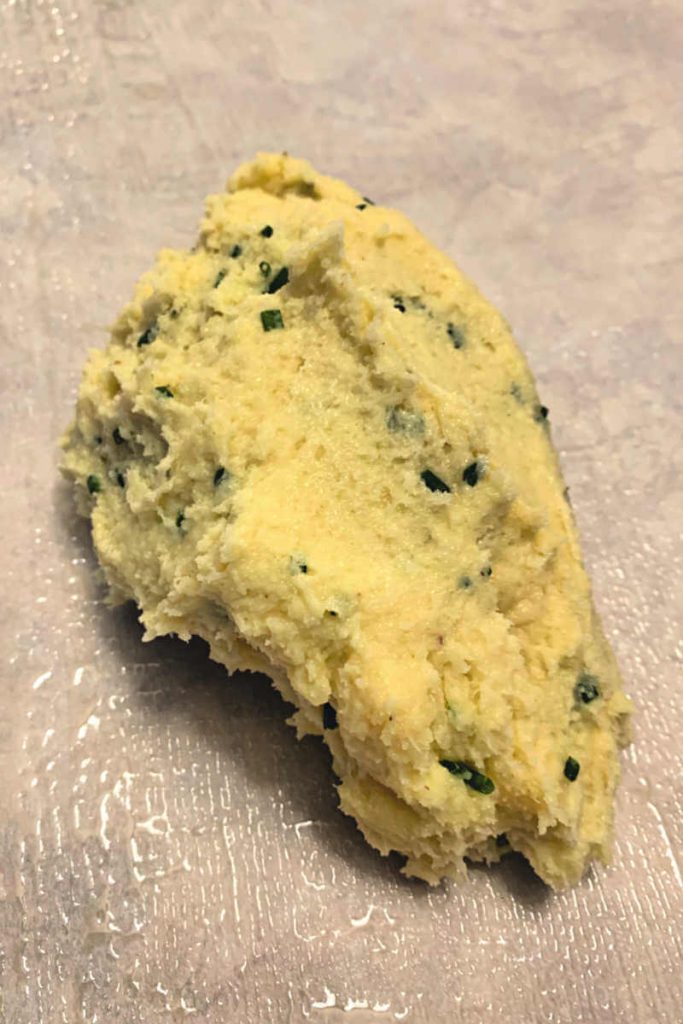 After that, carefully remove the paper from the top side of the dough and cut in triangles or desired shapes. It’s easy to use a pizza cutter or a knife to do this. 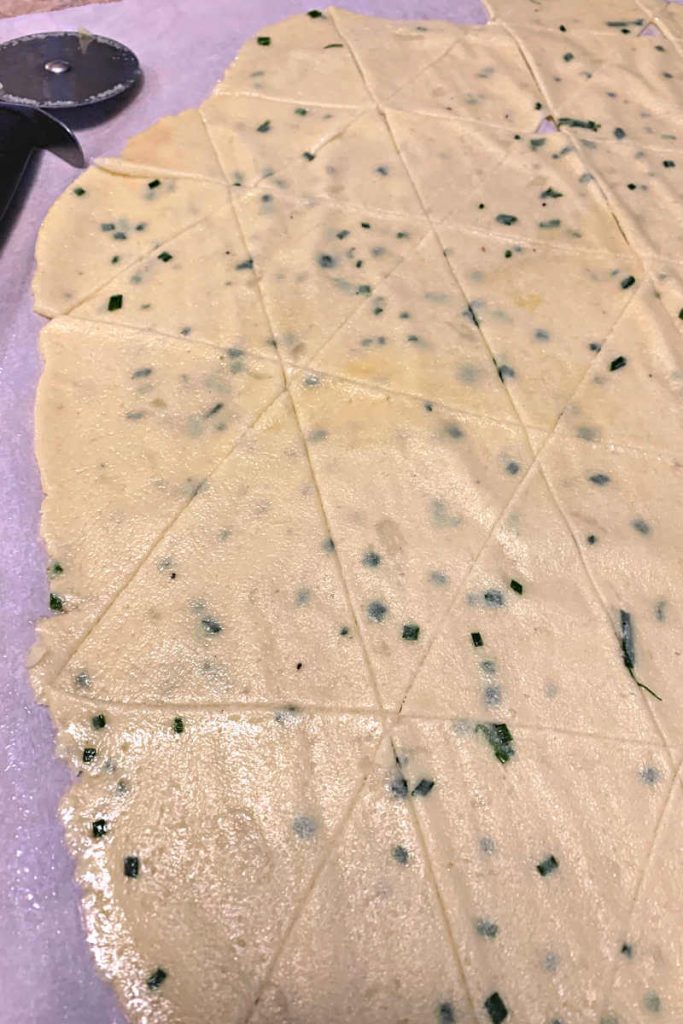 Ideally, they will all be about the same size so they cook evenly. Mine are not often exactly the same, but that’s okay!

Then, peel the dough triangles carefully off or the parchment paper one at a time. Set them on the baking sheet lined with parchment paper or silicone liners. They don’t have to be far apart, but they will puff up a bit.

Don’t be worried if they fall apart slightly as you put them on the pan. Almond flour is not gluten and will not always hold. Just get them to the pan and patch it up. It may not be quite as pretty but will taste just as good! Now, bake the keto chips in the 350-degree oven for 8-10 minutes or until the edges begin to brown. The browner they are, the crispier they will be. As I said in the tips’ section, watch them toward the end so they don’t burn! 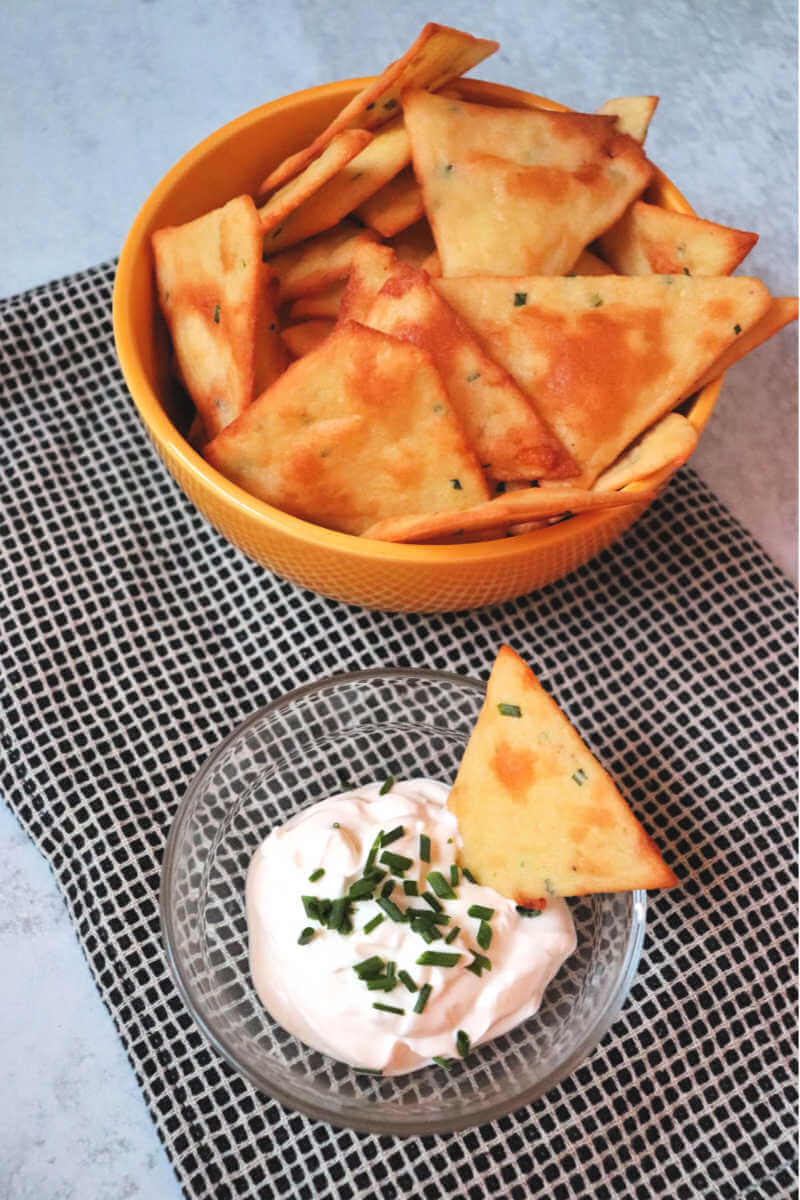 Last of all, let them cool and serve with your favorite dip, as a snack on their own, or alongside your favorite keto soup, maybe like my Best Ever Keto Broccoli Cheese Soup! 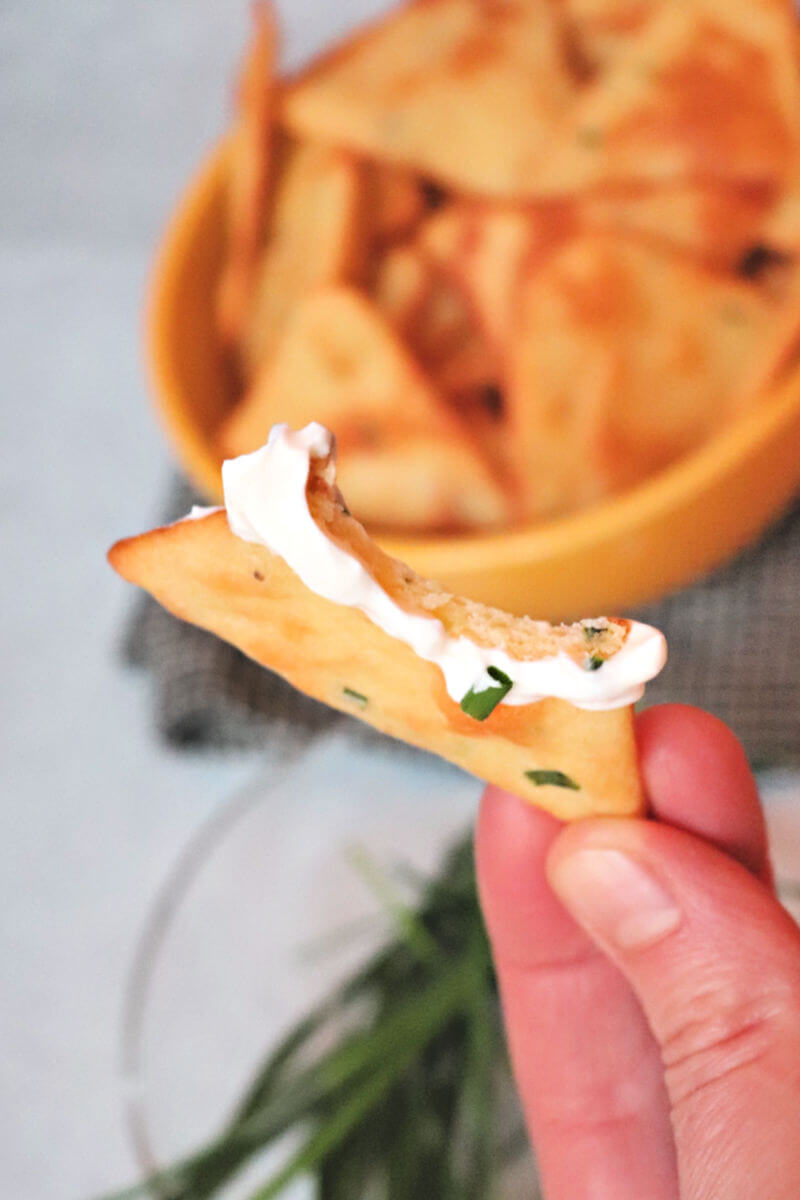 This weekend the kids selected Despicable Me 2 for family movie night. I have to admit, it’s pretty hilarious and one I don’t mind watching with them.

ANYWAY, there’s a fabulous scene where Gru has on a tortilla chip sombrero hat and the brim is filled with guacamole. He’s looking dejected and snaps off pieces of the hat and dips them in the guacamole before popping them in his mouth. Another character comes by to console him and says:

I too have spent many nights trying to drown my sorrows in guacamole.

There may have been tears we were laughing so hard when we first watched this scene.

Chips are a huge part of American culture – potato chips, tortilla chips, baked chips, and all the brands. They’re in movies, at parties, all stores. They’re the salty snack!

Rather than fight it I just have to have a better option. We all love chips and the spectacular dips to go with them. Try these sour cream and onion keto chips out. They’re pretty high on my list of favorite keto snacks. 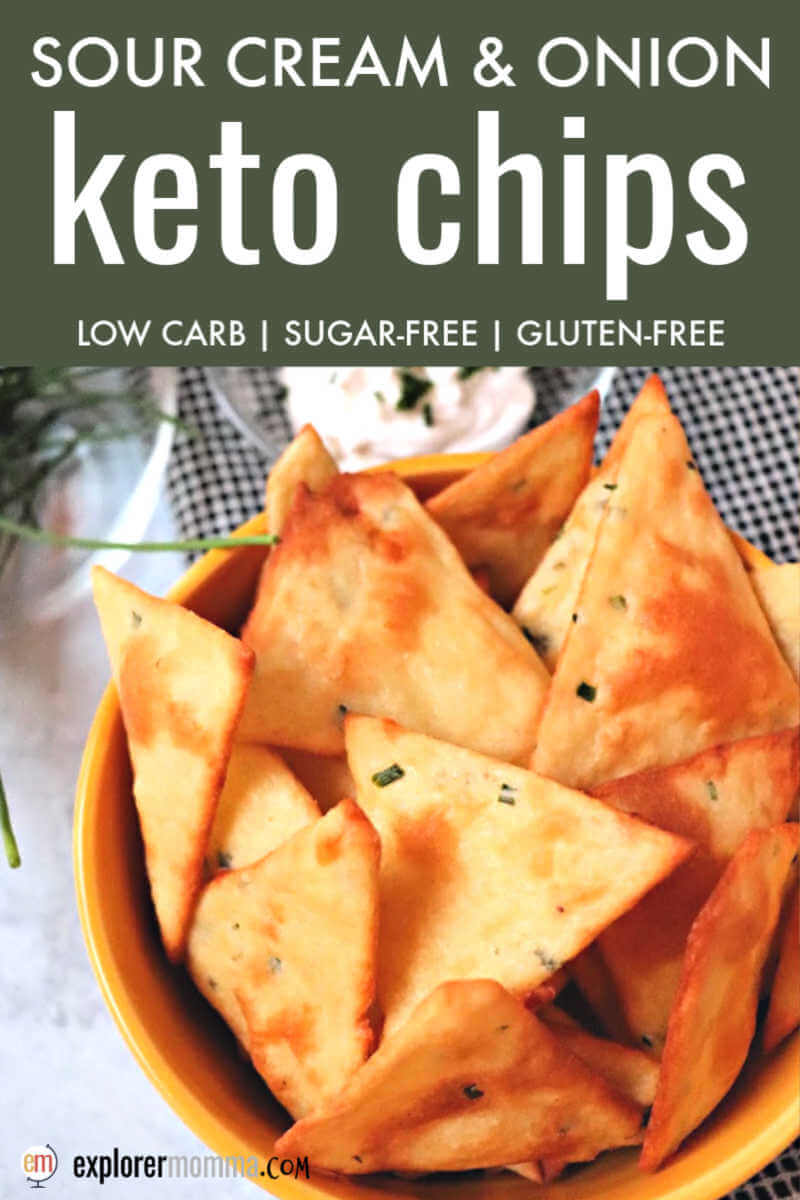 Please be aware I am not a medical specialist or nutritional professional. On this blog, I share recipes and what works for me. Please do not take anything on this blog as medical advice and always consult with your doctor before starting any diet or exercise program.
I use Myfitnesspal.com to calculate nutrition facts as a courtesy to my readers, and I remove erythritol from the final carb count and net carb count because it does not affect my own blood glucose levels.
This is as accurate as possible, but it’s best to independently calculate nutritional information on your own with the specific ingredients you use.
I expressly disclaim any and all liability of any kind with respect to any act or omission wholly or in part in reliance on anything contained in this website. 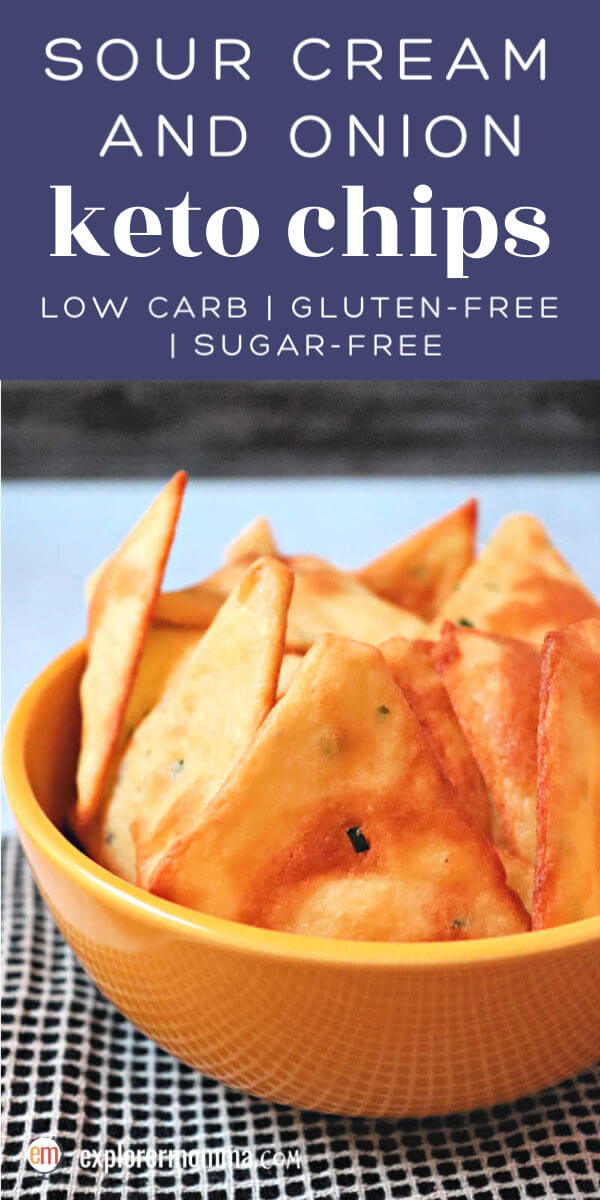