When you travel do you search out the local restaurants? Do you try to get at least a glimpse of the culture and history of a place? I’m admittedly a history nerd and love to meet with the people who live where I travel to get their inside stories. Georgia is one of those magical places that celebrates and shares its own culture. With warm hospitality, Georgians are more than ready and willing to give you a huge traditional dinner party, dance, and song. Many people struggle on a daily basis in the country, but their pride in culture and tradition are a foundation and bring an optimism for the future. 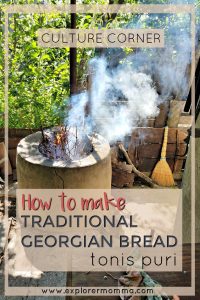 The bread and salt of Georgia

My husband is from Georgia, and this summer we got to take the kids over to see family, the people, and places he loves. Guests are greeted with the “bread and salt”, in Georgia generally meaning a feast, always including bread. Most any meal you eat in the country will involve a plate of bread on the table. Moreover, bread is a respected food, almost revered. It’s a huge insult to throw it away or waste it. The salt on the table represents the spice, or the relationships and friendships made.

Being Georgian, my husband has always emphasized the importance of the bread. Can you imagine my 8-year-old’s excitement when she was invited to help make it in the traditional oven? If you look at the picture below, it’s sort of an earthen kiln, called a “tone”. 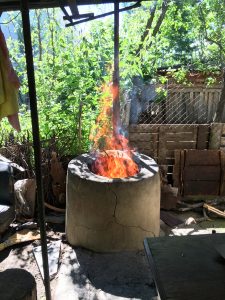 Georgian culture is rich and deep, full of emotion. It’s fascinating to see bread being made today in the same way it’s been made for hundreds of years. It represents the welcoming hospitality of the Georgian people. Take a dive into Georgian culture and learn how this traditional Georgian bread is made.

First of all, make the basic bread dough and set it to rise. Families use a simple recipe including flour, salt, water, and yeast. Then, prepare the oven (kiln) by starting a huge fire in the center and burning down the wood or dried grapevines to ashes. Every household (nearly) in Georgia has their own grapevines and make wine. I could go into the significance and symbolism of using the grapevines, but I’ll save that for another time. The fire must burn for half an hour or more to get the oven hot enough to bake the bread. While this happens the dough rises and you set out the cooling racks. 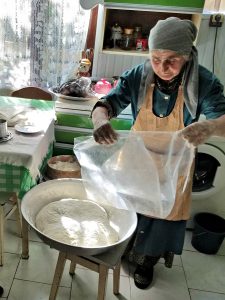 Once the fire burns long enough, the ashes will smolder down at the bottom of the oven. At that point, place large sheets of metal over the hot ashes so the dough can be safely placed on the sides of the oven (tone). 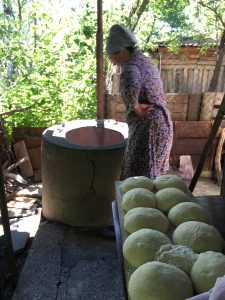 Then, pat out the risen dough and press it in a sort of oval form all over the insides of the kiln. This is not a process you go through for one or two loaves, no! A family will bake 10-20 or as many as fit in the kiln. Then, that bread is used for a large event, or for the family for the next couple of days or so as well as for the cousins and neighbors surrounding. The next time it will be someone else’s turn to bake. 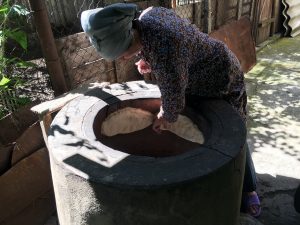 As soon as you stick the bread dough to the walls of the kiln, carefully remove the metal sheets from the ashes below. Now the heat and steam can come up and hit the dough to bake. Finally, close the top of the kiln (tone), and bake the bread for 20-30 minutes. 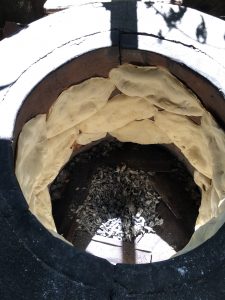 When it’s ready, take off the top of the oven and remove the bread loaves (tonis puri) and set to cool. 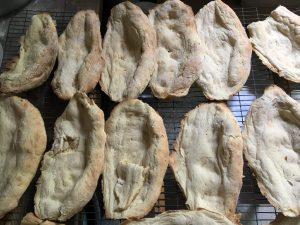 Have you ever smelled freshly baked bread? If so, you will know your mouth immediately begins to water, and you’re drawn to the smell. This is the time the kids, and some adults, suddenly decide it’s time to help so they can rip off a bit of that delicious yumminess. Bread brings the family and guests together with smiles and laughter. 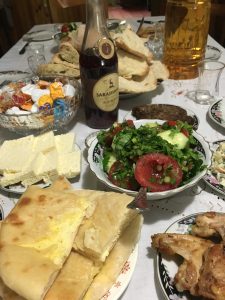 Several years ago we visited my husband’s grandmother’s home in the village of Ali, Shida Kartli region of Georgia, for her 100th birthday. She shared many stories during the time we were there, but one stood out for me. With a big smile, she told me the story of two naughty little boys, my husband and his brother, who used to “help” her around the house.

They would get into everything, but one day she was making the bread in the “tone”, as she did often. The boys were told to stay away from the oven, she would give them bread when it was dinner time. But being two mischievous and impatient boys, they could not wait for dinner. When she found them they had the lid off the oven and two heads were down inside the kiln (oven). Thankfully, it had already cooled down, but there were bits like cracker still stuck to the side. My husband reached far in to get one of these pieces and actually toppled inside. Grandma Tamar had to jerk both boys out, and my husband’s head was covered in the ash from the bottom of the oven.

She cackled and said he had some scratches, was covered in ash, and looked a mess. Really, it could have been worse, but the bread was medicine. They made and shared it together just as her ancestors did and her grandchildren do today.

How do you welcome guests to your house? What traditional foods or crafts does your family enjoy?

Read about our favorite places to visit as a family in Batumi, Georgia, on the Black Sea. 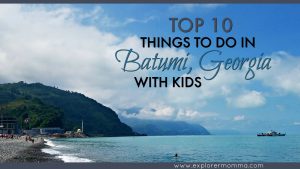 Tasting Georgia: A Food and Wine Journey in the Caucasus by Carla Capalbo

Supra: A Feast of Georgian Cooking by Tiko Tuskadze