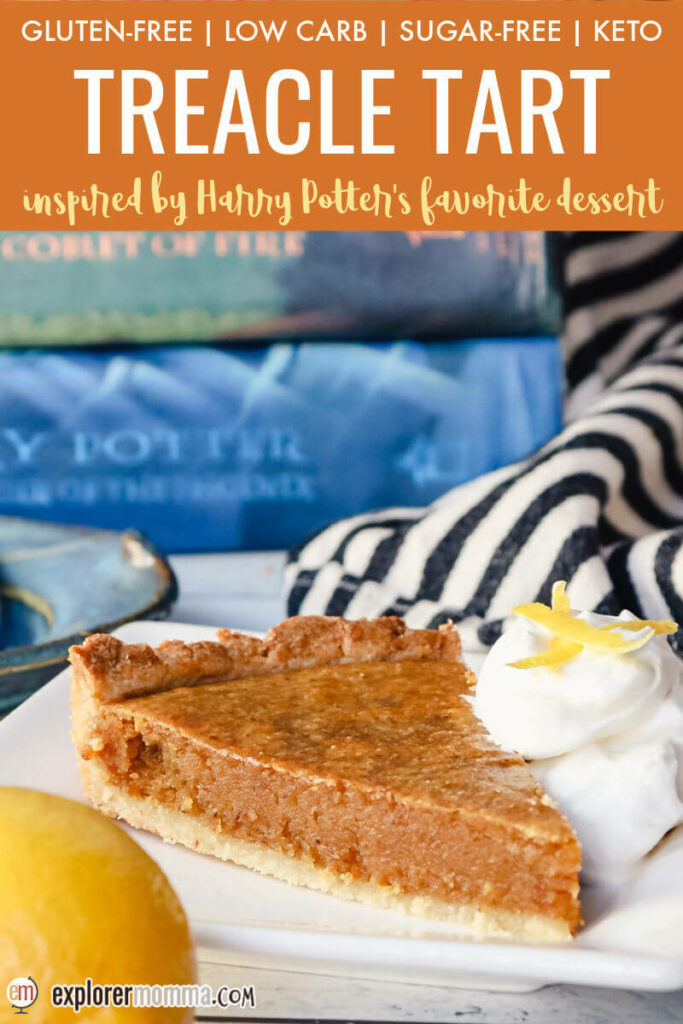 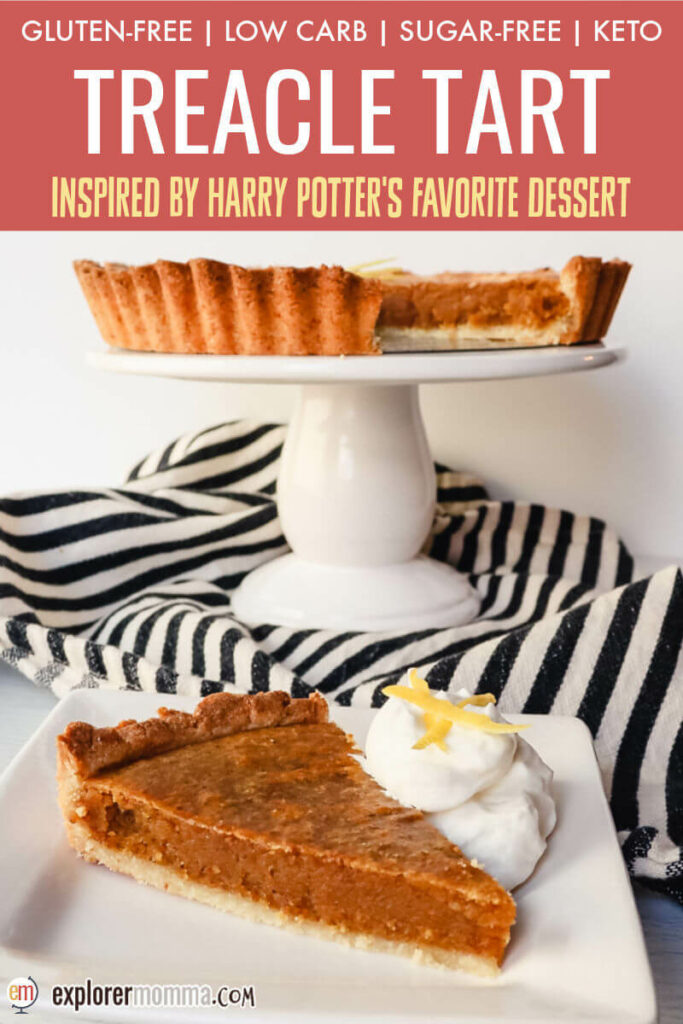 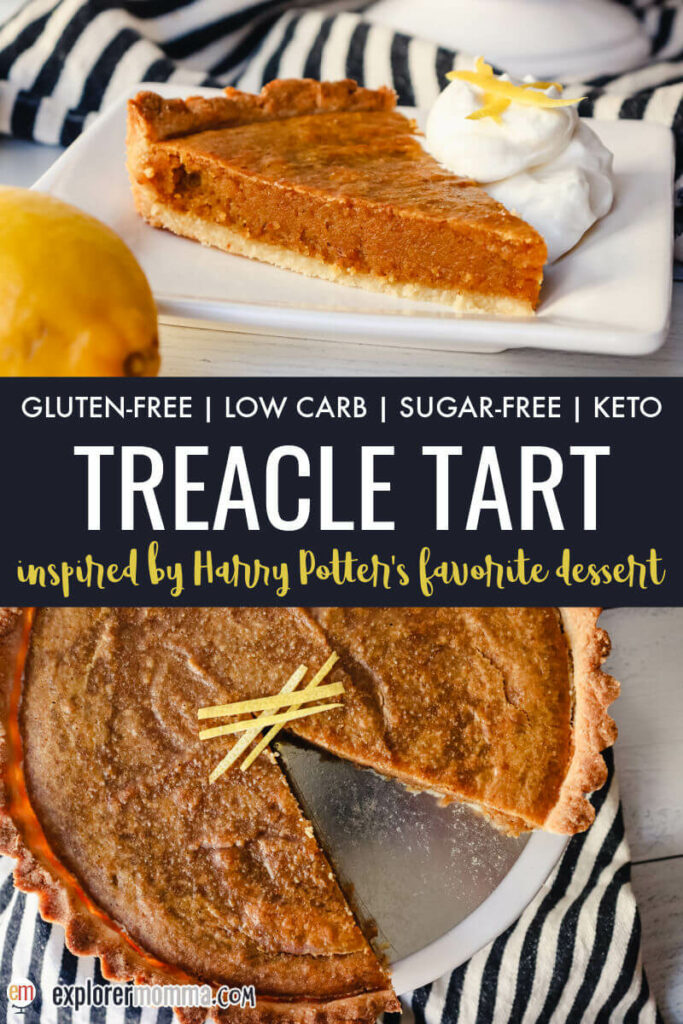 Did you know that treacle tart is Harry Potter’s favorite dessert? Indeed! This version is a keto treacle tart inspired by the British classic and a delicious low carb way to celebrate our beloved book series. The base is an almond flour shortcrust and the filling a super-flavorful lemon, almond, and sticky gooey goodness with a hint of molasses flavor. Top with sugar-free whipped cream and accio treacle tart!

This post may include Amazon links. As an Amazon Associate, I earn from qualifying purchases.

Have you ever heard of treacle tart? For the longest time, I heard about it only in books. Harry Potter was by no means the first literary character to have a love of treacle tart. However, he may be the most famous!

For Harry, treacle tart may remind him of the Hogwarts’ feasts, of things warm and comforting and welcoming. In fact, the dessert is mentioned many times throughout the series. When Professor Slughorn introduces the potions class to the powerful love potion amortentia, Hermione of course knows it induces the smell of what most attracts us.

They chose the one nearest, a gold-colored cauldron that was emitting one of the most seductive scents Harry had ever inhaled: somehow it reminded him simultaneously of treacle tart, the woody smell of a broomstick handle and something flowery he thought he might have smelled at The Burrow.

Oh Harry – we understand your love of treacle tart! The broomstick handle references flying and quidditch, and then I would assume the flowery smell is Ginny. But back to keto baking.

What in the world is treacle? If you’ve read Alice’s Adventures in Wonderland, you may remember the three sisters at the bottom of the treacle well. Which of course makes no sense as the Dormouse tells Alice this story at the famous tea party.

Treacle is essentially what is left over after cane sugar is boiled to produce sugar and most of the sugar is taken out. It does have a sugar content, but it’s known more for its vitamins, minerals, and its appealing dark rich color and flavor. Have you guessed what it’s called in the U.S.?

In Britain, you may hear reference to golden treacle. Golden treacle is a lighter syrup, the famous secret recipe “golden syrup” introduced in the late 19th century. Today, most treacle tart recipes include this light super-sweet syrup.

What’s in a classic treacle tart?

A few years ago, my daughter and I watched an episode of the Great British Baking Show Master Class. Mary Berry made her version of this quintessential British dessert, and my daughter looked and me and scrunched up her face and said, “The filling’s golden syrup and bread crumbs? There’s not even any actual treacle in it, is there?”

She was thinking more of the dark treacle, but as I mentioned, golden syrup is sometimes called light treacle. Now, her reaction to the bread crumbs amused me greatly. But, the traditional recipe for treacle tart filling does include bread crumbs, golden syrup, lemon zest/juice, eggs, and other various ingredients depending on the recipe.

It’s baked in a shortcrust pastry in a tart pan and served with clotted cream, whipped cream, sour cream, or even ice cream or yogurt. Something creamy.

More people than just the British love this classic dessert. I decided it was high time we created some Harry Potter-inspired foods my daughter could actually eat if she wanted. She received more than one invitation to Harry Potter-themed birthday parties, Halloween parties, and celebrations super-excited yet sad because she couldn’t eat the themed treats.

“Well, if I must, I must,” the King said, with a melancholy air, and, after folding his arms and frowning at the cook till his eyes were nearly out of sight, he said in a deep voice, “What are tarts made of?”

“Treacle,” said a sleepy voice behind her.

🔪 Instructions on how to make low carb treacle tart

First of all, get out all the equipment and ingredients to make the keto treacle tart.

The first component to make is the base. It’s simple almond flour and butter crust and easy to press in the tart pan.

Preheat the oven to 350 degrees Fahrenheit and grease a shallow 9.5 inch tart tin, cake tin, or pie plate. Use whatever you have that would work, but I do like the classic fluted edges of a tart pan. Also, if the pan has a removable base, it makes it easier to get the tart out for serving.

Now, to make the gluten-free shortcrust, whisk together the almond flour, sweetener, and salt. Either powdered or granular sweetener such as Swerve or Lakanto Monk Fruit should work well. Then pour the melted butter into the mixture using either your fingers, a spatula, or a stand mixer. It should at that point resemble moist, sandy crumbs.

After that, press the crust mixture evenly into the base of the baking dish. It may take a little time, but use your hands, or a cup, spatula, or even another piece of the dough to make a nice thin but even base.

Next, place it in the oven for about 12 minutes. This is just to dry it out and bake it so it does not get soggy when the filling is put in.

While the base is baking and then cooling, make the filling by placing the butter into a medium saucepan. Be sure it’s big enough to hold all the filling ingredients.

Start by heating the butter over medium-low heat. Then add the lemon juice, lemon zest, yacon syrup, and brown sweetener. Melt it all together, stirring constantly until it begins to simmer or just bubble.

What is yacon syrup and where do you get it?

What in the world is yacón syrup, and why in the world is it in this keto treacle tart? Well, high up in the Andes Mountains there exists a plant with tuberous roots called the yacón plant.

The sweet syrup is extracted from the roots in a process somewhat similar to that of maple syrup. In South America, it’s believed to have many medicinal purposes such as improvements in diabetes, kidney and digestive disorders, and weight loss.

In the keto treacle tart recipe, I use in place of the golden syrup or treacle. It’s keto-friendly when used sparingly, but I don’t like to use a lot of it because it does have more carbs than other sweeteners. Buy it at health food or specialty grocery stores or on Amazon.

However, if you don’t have or don’t want to use yacon syrup, allulose is a good alternative for a similar consistency. Otherwise, just use the same brown sweetener you’re already using in the recipe and add an extra one-fourth cup in place of the yacon.

Once the mixture is just starting to bubble in the saucepan, stir in the almond meal and almond flour gently until everything is melted and well-incorporated.

Then, whisk the eggs in a small bowl then mix them into the filling mixture.

Now, pour the filling into the base, and place it back in the oven for 20 more minutes.

When baked, the tart should be golden brown and set, with a slight wobble in the middle. Let it cool for at least 20 minutes on a cooling rack, before slicing and serving.

How to make the sugar-free whipped cream

Lastly, whip the cream and sweetener with a hand or stand mixer until stiff peaks form. Serve the keto treacle tart slightly warm with whipped cream or any other sugar-free cream you prefer. Some good options are crème fraîche, sour cream, clotted cream, or ice cream.

My mother had asked me what were the Doctor’s favorite dishes, and I had told her: spare ribs, sliced beetroot, fried bread, shrimps, and treacle tart.

It’s best to store any leftovers in an air-tight container in the refrigerator. The tart will be good for up to about a week.

Also, it’s possible to freeze leftover pieces wrapped in foil, and/or in an air-tight freezer container. After that, simply take out one at a time when you want a delicious keto dessert to remind you of all its literary references.

Set the piece of tart out about half an hour before you’d like to eat it. The low carb treacle tart is best warmed slightly in the oven (or microwave) with a sugar-free clotted or whipped cream topping.

A moment later the desserts appeared. Blocks of ice cream in every flavor you can think of, apple pies, treacle tarts, chocolate eclairs and jam doughnuts, trifle, strawberries, jelly, rice pudding… As Harry helped himself to a treacle tart, the talk turned to their families.

Can I tell you how excited I am for this series of recipes? You may know that a lot of my recipe experiments come from a need to make foods healthier and fun for my kids. When you have a child who’s not supposed to eat gluten, sugar, and many other things, it’s hard for the kid!

As I mentioned before, children are often asked to Harry Potter-themed parties for birthdays, school, or other celebrations. Why be left out? Or maybe you want a keto-friendly option for a Halloween party, or perhaps it’s necessary to have a treat while you binge-watch the movie series. I feel ya!

After the keto treacle tart, I challenge you to make Hagrid’s favorite, Keto Rock Cakes! We have many more more book-themed keto recipes to share coming soon!

*Nutrition Facts per MyFitnessPal.com. For the most accurate facts, calculate your own with the exact ingredients you use in the recipe.

Please be aware I am not a medical specialist or nutritional professional. On this blog, I share recipes and what works for me. Please do not take anything on this blog as medical advice and always consult with your doctor before starting any diet or exercise program.

I use MyFitnessPal.com to calculate nutrition facts as a courtesy to my readers, and I remove erythritol from the final carb count and net carb count because does not affect my own blood glucose levels.

This is as accurate as possible, but it’s best to independently calculate nutritional information on your own with the specific ingredients you use. I expressly disclaim any and all liability of any kind with respect to any act or omission wholly or in part in reliance on anything contained in this website.