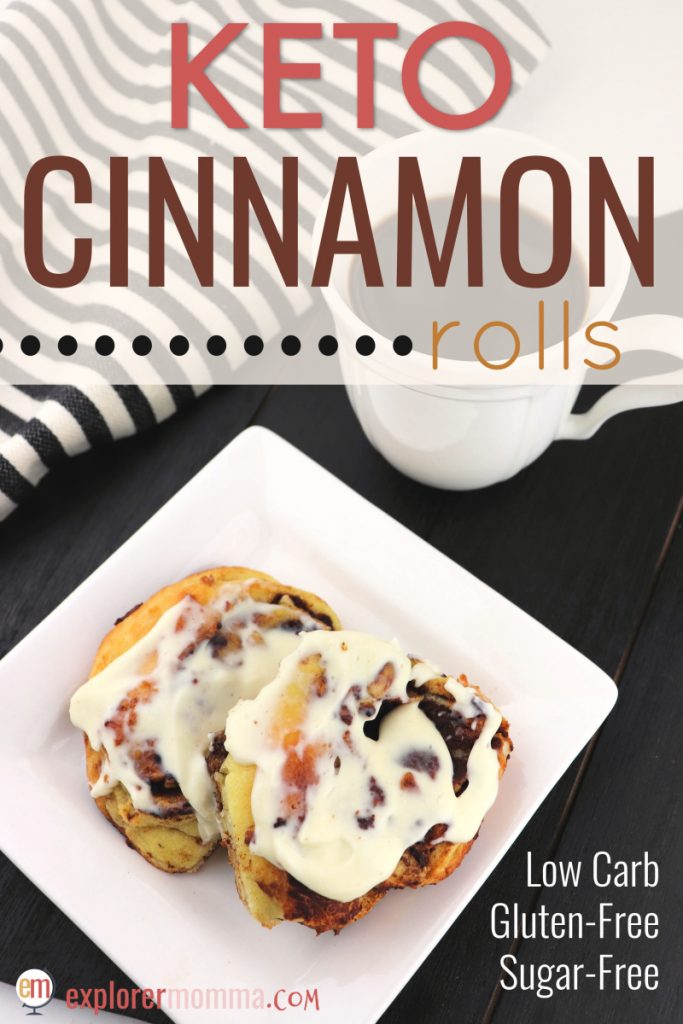 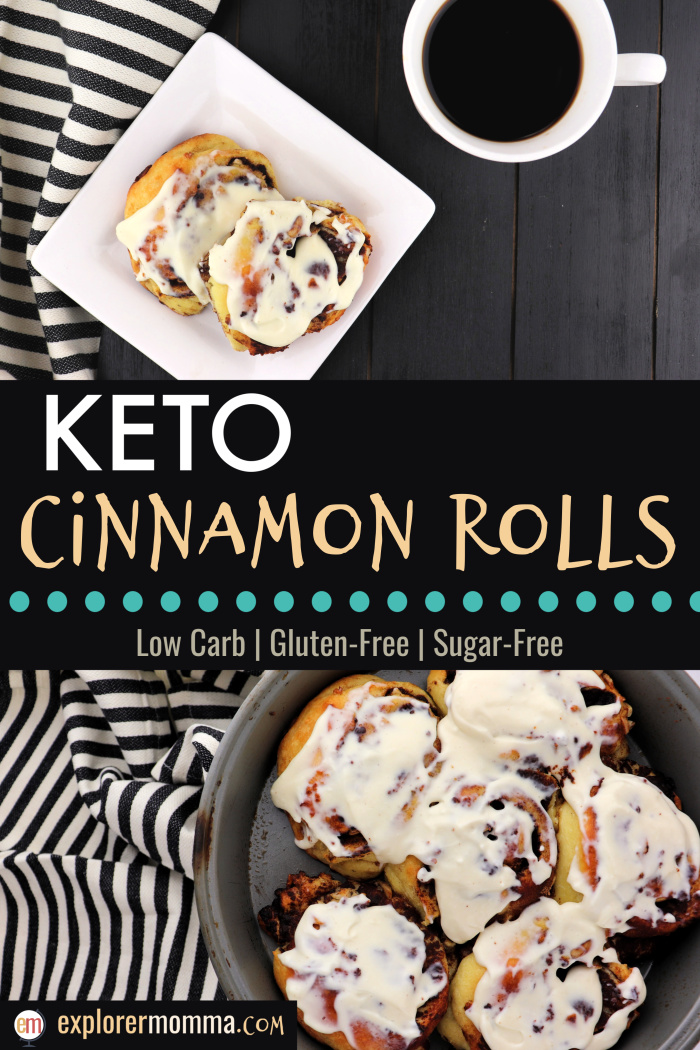 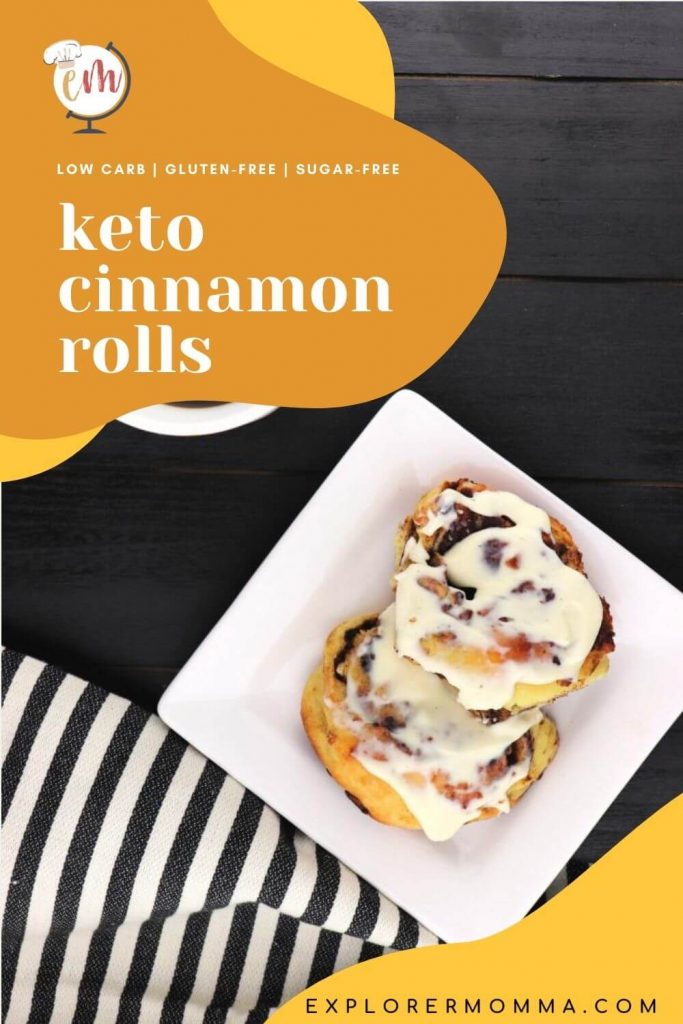 Gooey cinnamon goodness. This is the best keto cinnamon rolls recipe! They’re the perfectly delicious, low carb, gluten-free breakfast with none of the guilt.

This post may include Amazon links or other affiliate links. As an Amazon Associate, I earn from qualifying purchases.

For me, cinnamon rolls are definitely in the top 5! As a matter of fact, if I’m offered a cinnamon roll rarely can I refuse. That’s magnified of course when one can smell the cinnamon and bread baking.

Therefore, can you imagine how excited I was to create this amazing, keto, low carb, gluten-free, sugar-free recipe? To be honest, I prefer it to the big name cinnamon roll chain. You know the one you walk by at the mall or the airport and sigh at the delightful aromas wafting about?

Yes, well these keto cinnamon rolls come ready to perfectly fit into your daily life, macros, and make you feel good! This past Christmas I gave in to my brother and ate a sugary, gluten-full pastry. Can you guess what happened? Afterward, I felt awful, bloated up, and my eyes puffed up (and that was NOT from lack of sleep!).

That’s my experience, so yours will of course vary, but I LOVE having keto options for my favorite foods.

Scroll down to the bottom for the printable recipe or PIN it here for later!

Cinnamon is how I roll.

Cinnamon bun or cinnamon roll day! Now there’s a holiday I can get behind and celebrate with real gusto!

The cinnamon roll is generally believed to have originated in Sweden. Swedes started spicing their pastries with cinnamon as far back as the 1500s. Then into the 1900s, the sweet bread became more popular alongside coffee. Yes, coffee parties were “in”, and the delightful cinnamon roll was at the heart of those parties.

Consequently, we fast forward to 1999 when “Kanelbullens Dag” became an official secular holiday. It’s celebrated in particular in Finland and Sweden. Furthermore, guess what the most exciting thing about this is to me?

When is this day? None other than October 4, which is the absolute best day of the year!! It just so happens it’s also my birthday!

I recently discovered “Kanelbullens Dag”, and my keto cinnamon rolls recipe is the perfect way to celebrate. Cinnamon rolls can most certainly be keto-friendly with a delicious fathead dough. Why not whip some up on October 4 or your own birthday? Or really any day of the year…

To begin, get out all of the ingredients and kitchen utensils. First, put the mozzarella and cream cheese into a microwave-safe bowl.

Second, warm the cheese in the microwave to melt for one to two minutes. The time will depend on the strength of your microwave.

Next, add in the almond flour, 2 tablespoons of Swerve Confectioner’s, and baking powder and use a hand or standing mixer to combine it all into a dough.

Now, continue to mix and add the eggs in one at a time. The mixture should be worked into a dough, keep mixing or kneading it until it comes together.

Roll out the dough

It may be a little sticky, and if it is too gooey to handle place it in the refrigerator for 15 to 30 minutes before rolling it out. Then put the dough in between two pieces of parchment paper.

Tip: Oil the parchment paper with coconut or avocado oil so the dough doesn’t stick when rolled out.

Roll it out into a large rectangle about 1/4 of an inch thick.

Now take off the top piece of parchment paper, and use a pastry brush to brush the melted butter over the dough.

For the next task, whisk together the cinnamon and powdered sweetener in a small bowl. Then use a spoon or your fingers and sprinkle it evenly over the butter on the dough.

This is also the time to sprinkle a half a cup of nuts evenly over the dough if you wish.

Next, this is the part where the parchment paper becomes really handy. Use it to help roll up the dough, guide it from the narrow end until it becomes a log.

Then form it with the parchment paper to make it even, and cut it into 6 equal rolls.

Tip: Use a piece of FLOSS to cut the rolls! Slide the floss under the log to the desired cut and cross the floss around the top. It will cut evenly from the outside to the middle so it’s an even cut. No more jagged edges or smashed rolls!

Now carefully take each roll and put it swirl up in a 9″ circle baking pan, evenly spaced.

The preheated oven should be at 375 degrees Fahrenheit. Bake the rolls for 20 to 25 minutes.  If the top and edges begin to brown too soon, cover with foil.

Whisk together in a small bowl the softened cream cheese, heavy cream, and powdered sweetener. Use the pastry brush or a butter knife to brush the frosting over the slightly cooled keto cinnamon rolls.

Finally, grab a cup of coffee, tea, or your preferred morning drink.

You’ll have a pretty darn good breakfast if I do say so myself! Also, these freeze well for up to a month if you’d like to just warm one up when you’re ready!

Anyone who gives you a cinnamon roll fresh out of the oven is a friend for life.

I like to make recipes as easy as possible. This is especially true in this case as keto cinnamon rolls are probably my daughter’s most used recipe.

First of all, it’s good to have parchment paper and spray coconut or avocado oil on hand. When you roll out the dough, be sure to spray the parchment paper with oil, and sandwich the dough in between the paper.

Or maybe what’s your favorite breakfast you wish were low carb and keto? Let me tell you, I eat a LOT of eggs. The trick is how to prepare them just right to make them interesting.

It’s so much fun to test recipes and even more exciting when they are a triumph! My keto cinnamon rolls are a recipe I’m very proud of and hope they become one of your favorites too.

You’ll probably even want to make them for the official October 4th Cinnamon Roll Day! And today too. 😉

This amazing giant peanut butter cup is a

Please be aware I am not a medical specialist or nutritional professional. On this blog, I share recipes and what works for me. Please do not take anything on this blog as medical advice and always consult with your doctor before starting any diet or exercise program. I use MyFitnessPal.com to calculate nutrition facts as a courtesy to my readers, and I remove erythritol from the final carb count and net carb count because does not affect my own blood glucose levels.
This is as accurate as possible, but it’s best to independently calculate nutritional information on your own with the specific ingredients you use. I expressly disclaim any and all liability of any kind with respect to any act or omission wholly or in part in reliance on anything contained in this website.
Click here to cancel reply.