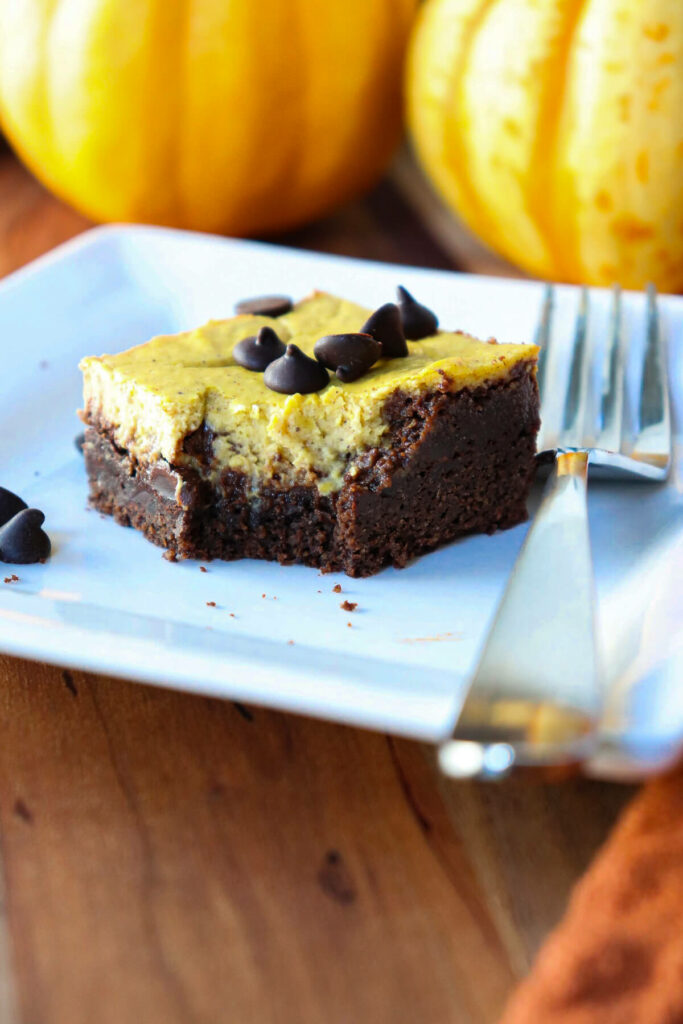 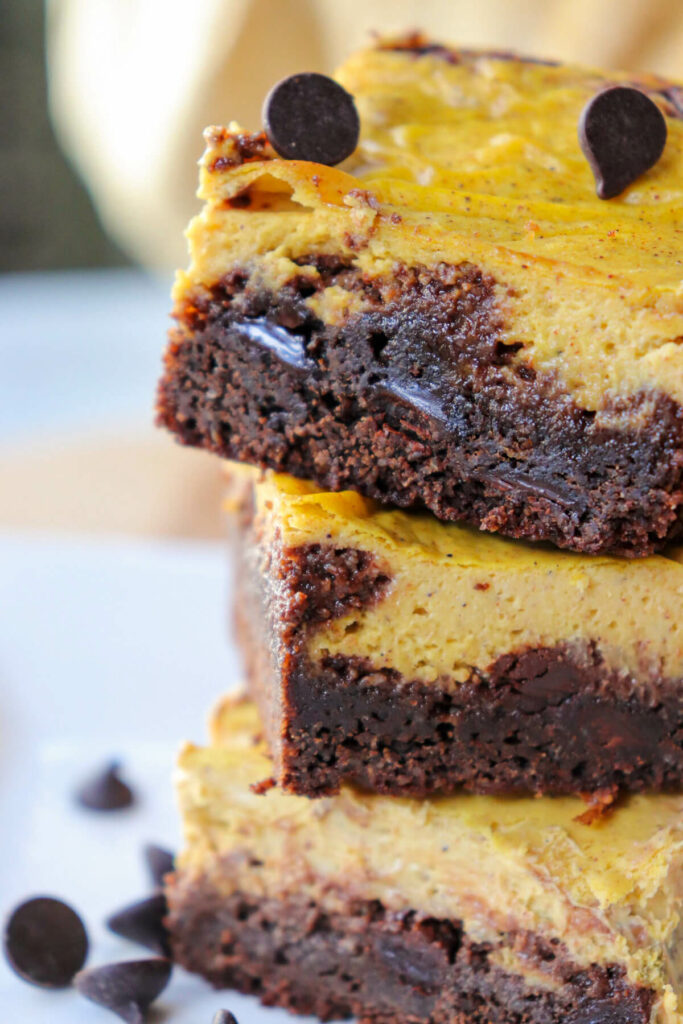 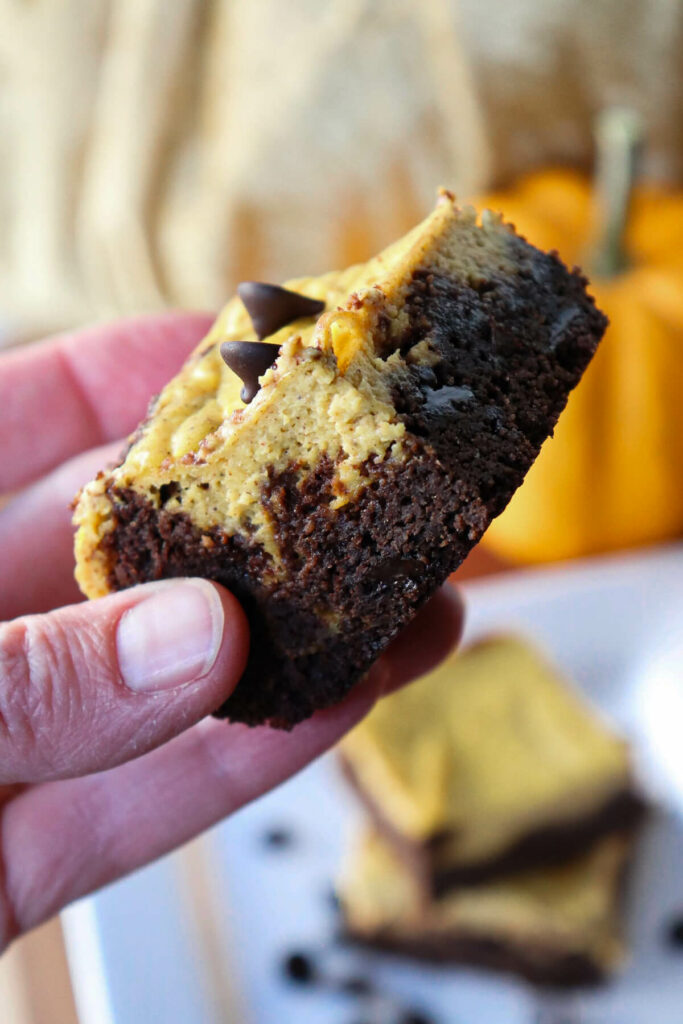 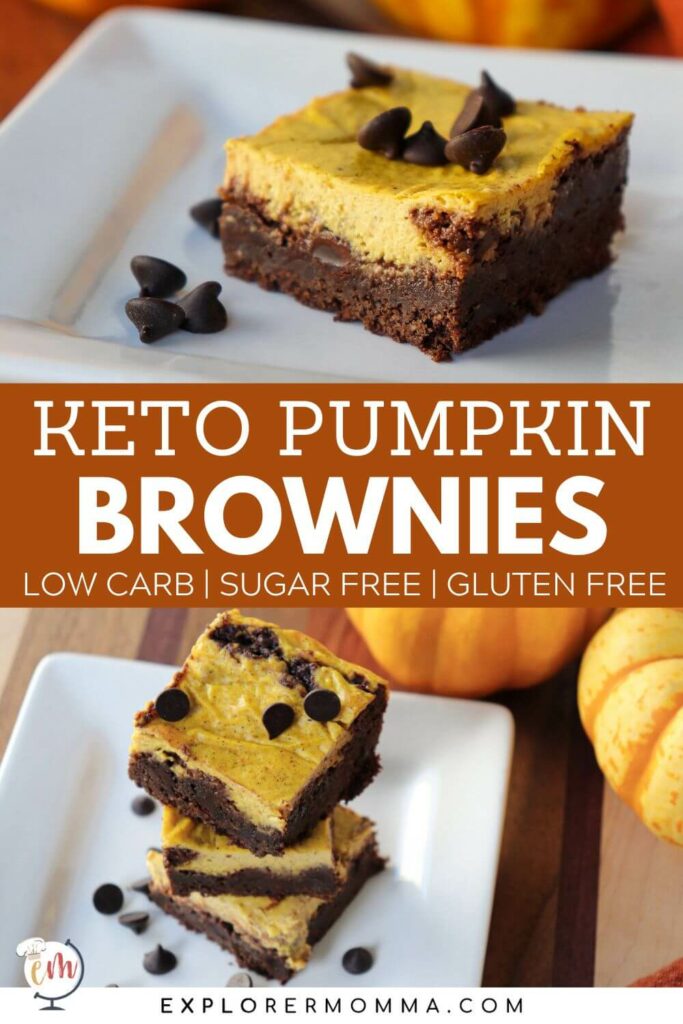 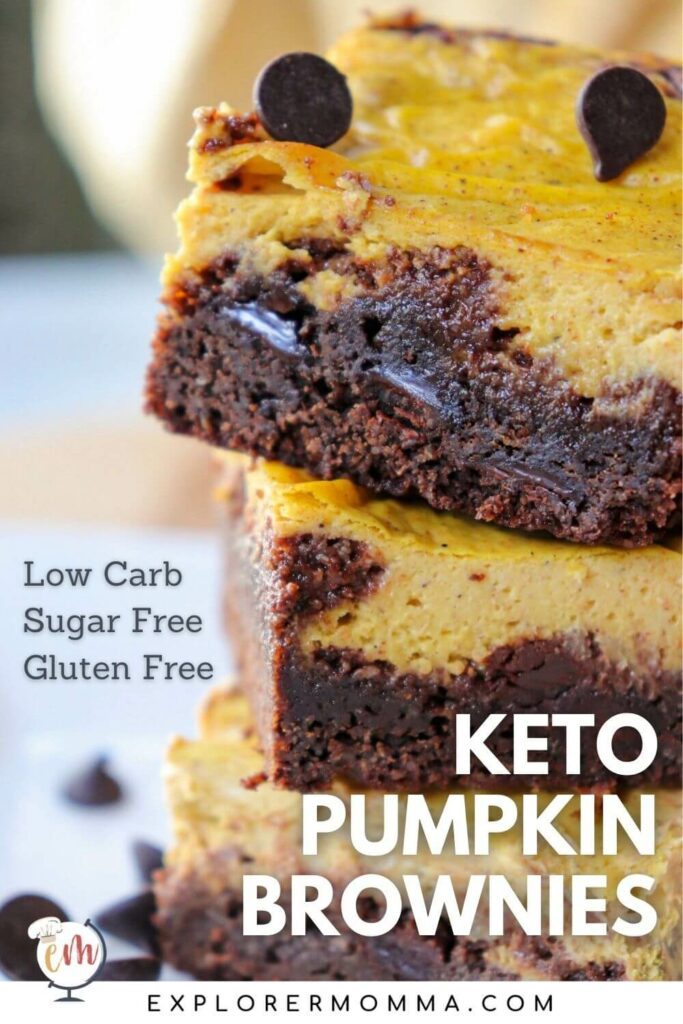 Fall is my favorite season and I love everything about it, especially the food! Pumpkin is one of my favorite flavors and I’m excited to share this keto pumpkin brownies recipe with you. Not only are they gluten free, but they’re also low carb and have no added sugar. They’re perfect for anyone on a keto diet or anyone who wants a healthier dessert option. Enjoy!

This post may include Amazon or other affiliate links. As an Amazon Associate, I earn from qualifying purchases.

The autumn air was crisp and cool as we pulled into the pumpkin farm. The bright orange pumpkins were arranged in neat rows, and the sweet smell of pumpkin spice was in the air. My kids were excited to pick out their own pumpkins, and we spent the morning wandering through the fields.

After picking out our pumpkins, we went to the farm store to look over their treats. They had some amazing looking pumpkin brownies, and my daughter gave me the puppy dog begging look. While the sugar and gluten filled kind would not work for us, I decided to make a keto pumpkin brownies recipe at home. Surely I could get a similar or even the same texture?

These brownies are everything you want in a pumpkin dessert. They’re fudgy, chocolatey, and full of cinnamon creamy pumpkin flavor. Yes, this is a fabulous flavor combo!

And best of all, they’re low carb with no added sugar.

What are keto pumpkin brownies?

Made with almond flour, pumpkin puree, and sugar free chocolate, they’re great for any occasion, but especially for fall holidays.

They start with a low carb almond flour brownie layer and are topped with a delightfully creamy sugar free pumpkin cheesecake. Swirl it and bake, and you have a fall party in your mouth!

Yes, pumpkin brownies can be keto and low carb. They are made with almond flour, which is a low-carb flour alternative, and pumpkin puree, which is a keto-friendly ingredient.

Additionally, these brownies are sweetened with erythritol, a keto-friendly sweetener that has zero net carbs.

Let’s take a look at the macros. In this recipe for sugar free pumpkin brownies, one serving is one brownie, and the recipe makes 16. One keto pumpkin brownie has 132 calories, 4 grams of protein, 12 grams of fat (6 grams of saturated fat), and only 2 grams net carbs per serving.

These macros for keto pumpkin brownies are figured with MyFitnessPal, with the ingredients I use in the recipe. I always recommend figuring out your own with the exact items/brands you use. It’s especially important to determine your own if you’re keeping close track and want to be accurate.

The first and most obvious kitchen item you’ll need to make keto pumpkin brownies is an oven. You’ll also need a baking dish and some basic baking tools, like an 8×8 inch pan, measuring cups and spoons, and a bowl for mixing.

I personally also like to use a blender instead of a mixer, but that’s up to you!

Using fresh and organic ingredients is important because they are less processed and contain more nutrients. When you eat something that is fresh and organic, you are getting the most benefit from that food. It’s like giving your body a little boost of energy and good health!

A note on the pumpkin in this keto pumpkin brownies recipe. I’m a huge proponent of homemade pumpkin puree from your own garden or the farmer’s market. However, if you must use that out of a can, be sure to get organic if possible.

To begin, get all the ingredients and kitchen gadgets ready to go.

Then preheat the oven to 350º F and spray an 8-inch square pan with avocado or coconut oil.

It sounds the opposite of what you should do but, only then line the pan with parchment paper. The oil will help keep the parchment paper in place so you can easily spoon in the brownie batter later.

Next, in a large bowl whisk together the dry ingredients for the brownie recipe layer: almond flour, allulose (or another keto sweetener), cocoa powder, baking soda, and salt.

I feel like allulose makes the brownies gooier in this recipe, but you can also use other keto-friendly sweeteners like monk fruit or erythritol (Swerve).

In a glass liquid measuring cup or bowl, combine melted oil, eggs, oil, and vanilla extract. After that, pour the wet ingredients into the dry and stir them well to form a thick batter. It will be thicker and stickier than a traditional brownie batter, so mix well until it’s completely smooth.

Next, transfer the keto brownies batter to the 8-inch prepared pan, and use a spatula (or wet hands) to evenly press it into the bottom of the baking dish.

It’s okay if it’s not perfectly smooth because the pumpkin layer will fill in the gaps. Set it aside for now.

In a medium bowl, beat together the cream cheese, egg, pumpkin puree, cinnamon, and 1/4 cup sweetener until smooth.

However, I’m sticking with the plain cinnamon because I personally think it pairs better with the rich chocolate brownie flavor.

I love my high powered blender, and I find it much easier to blend the pumpkin cheesecake ingredients together than mix them. It’s quick and easy and gets rid of those annoying cream cheese lumps or pumpkin puree strings.

However, I know not everyone has or will want to use a blender in this way, so it’s just my recommended option!

Now, pour the pumpkin mixture over the brownie batter in the pan, and spread it into an even layer.

Again, it’s okay if it’s not perfectly smooth because you’re going to swirl everything together anyway.

Swirl it up! All I mean by that is to take a toothpick and push it down through the cheesecake layer and into the brownie layer. Slowly make small circular swirls around the pan. This will blend the two layers a bit more, but not too much for an awesome pumpkin brownie batter.

Now, bake the brownies at 350ºF until the edges start to brown, and the center doesn’t wobble too much, 30-35 minutes.

Finally, remove them from the oven, and to finish, sprinkle the remaining 2 tablespoons of sugar-free chocolate chips over the top of the brownies.

Place them on a cooling rack and sprinkle on the saved chocolate chips. This will result in slightly melted chocolate, but the chips will still keep their basic shape.

Leave on the rack for 15 minutes or so then move the cooled brownies to cool completely in the refrigerator. Chill the pan for at least 2-3 hours or overnight, then cut them into 16 equal squares.

There are a lot of different types of flour on the market these days, and it can be tough to decide which one to use in your baking. So, which one is better?

Well, that depends on what you’re looking for.

Almond flour and coconut flour are both popular gluten-free flours. They have different textures and flavors, so which one is best for you depends on what you’re making.

Almond flour is made from ground almonds, so it has a sweet, nutty flavor. It’s great for cakes, cookies, and other baked goods.

Coconut flour is made from dried coconut meat, so it has a strong, slightly sweet flavor. It’s good for breads, pancakes, and other savory dishes.

It has a slightly sweet taste and a tendency to absorb moisture, so it’s perfect for recipes that call for a lot of moisture like pancakes and muffins because it puffs up a little more bread-like.

In the end, it all comes down to personal preference. I like both, but in this recipe wanted a denser, fudgier brownie so went with the almond flour.

🥣 How to store keto pumpkin brownies

These brownies are best stored in the fridge, in an airtight container. They will last for up to about 5 days this way. However, I DOUBT they’ll last that long!

You can also freeze them in an airtight freezer container for up to 3 months. Just thaw them overnight in the fridge before serving.

If you’re looking for a delicious and easy-to-follow keto recipe, look no further than these Keto Pumpkin Brownies! Who doesn’t love brownies?

Made with almond flour and sugar-free chocolate chips, they’re the perfect fall dessert on a low carb diet. These keto brownies are ultra fudgy and one of my favorite recipes.

Why not eat one any time of day, or at least whenever my sweet tooth calls!

Some of my favorite keto recipes:

*Nutrition Facts per MyFitnessPal.com. For the most accurate facts, calculate your own with the exact ingredients you use in the recipe.

If you LOVE amazing dessert cuisine and this delicious recipe, please help me out by giving it a five-star rating in the review area below!

Please be aware I am not a medical specialist or nutritional professional. I share recipes and what works for me on this blog. Please don’t take anything on this website as medical advice and please always consult with your doctor before starting any new diet or exercise program.

I use myfitnesspal dot com to calculate nutrition facts as a courtesy to my readers. Be aware I remove erythritol from the final carb count and net carb count because sugar alcohols do not affect my own blood sugar levels.

This is as accurate as possible, but it’s best to independently calculate nutritional data on your own with the ingredients you use per each nutrition serving. I expressly disclaim any and all liability of any kind with respect to any act or omission wholly or in part in reliance on anything contained in this website.