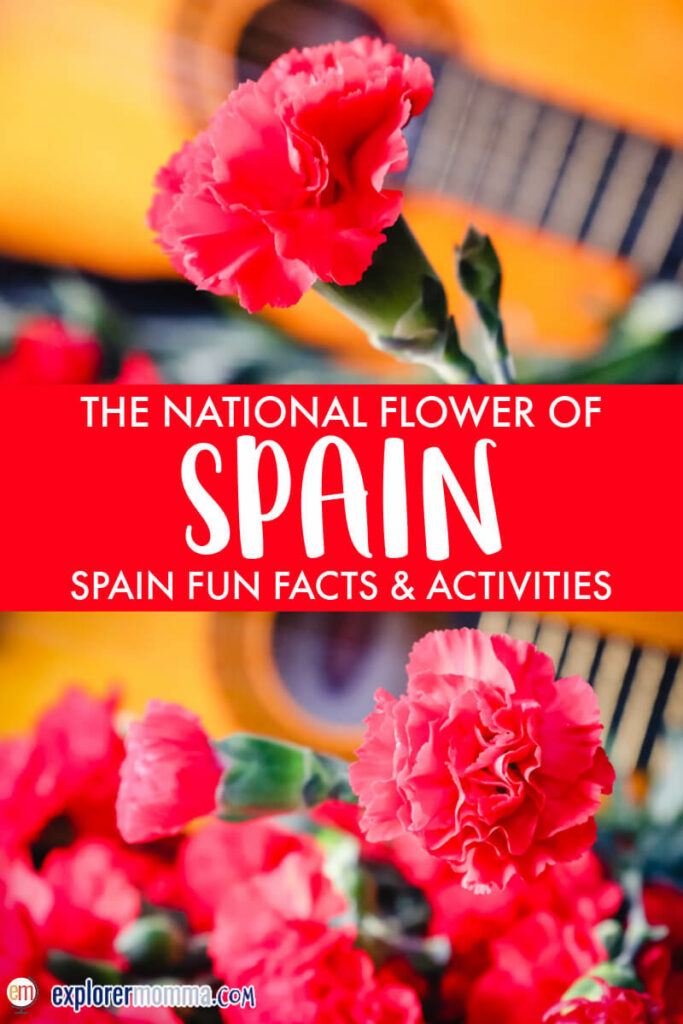 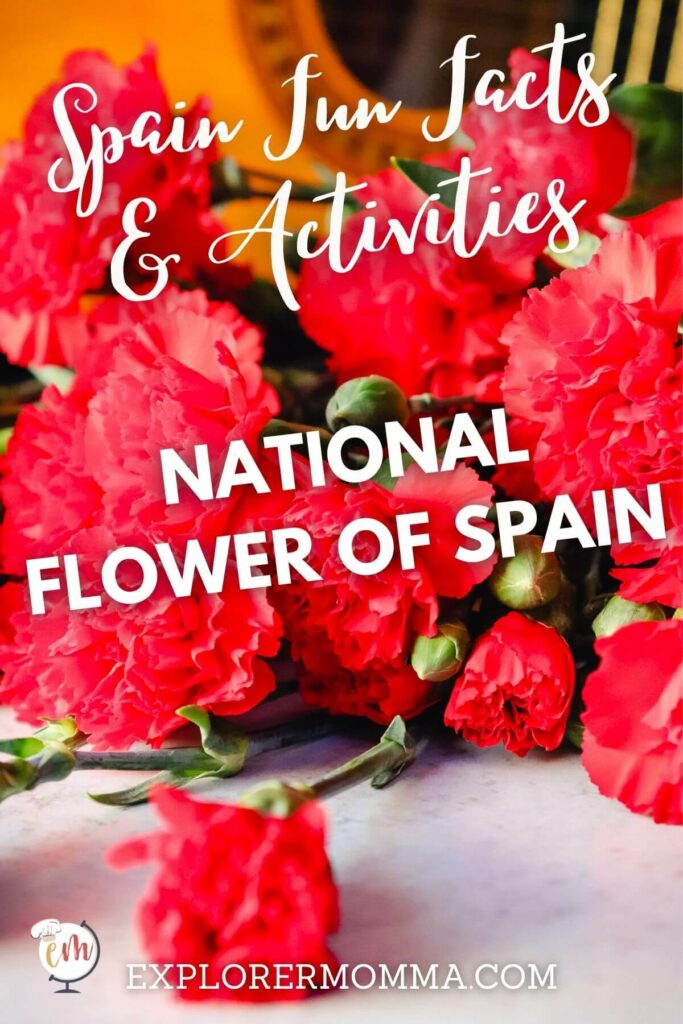 Let’s explore the National Flower of Spain, the Red Carnation. Spain’s national flower, the red carnation, symbolizes love and courage in many cultures. Learn why it’s the national flower, how to grow it, and even how to draw it! It’s time for fun facts and activities about Spain!

This post may include Amazon or other affiliate links. As an Amazon Associate, I earn from qualifying purchases.

What is it | Interesting facts | What it represents | Why the national flower of Spain? | Flamenco | Symbol of love | How to grow at home | When to plant | Where to buy | How to draw | Conclusion

What is the scientific name of a red carnation?

The red carnation is first of all a bright red vibrant and attractive flower. The carnation is a flowering plant with the scientific name Dianthus caryophyllus, in the dianthus family along with several other related flowers such as Pinks and Sweet Williams. “Dianthus” means “flower of the gods” in Greek, and the common name “carnation” comes from the Latin word “incarnationem”, meaning the incarnation of God.

Don’t you just love etymology, the study of the origins of words and how they change over time? Or maybe that’s just me!

Carnations come in many different colors, but perhaps the most well-known variety has rich red petals set off more by the strong green stem and leaves.

What was the original national flower color? Why red of course. In Spain, just imagine those beautiful bright colors standing out in front of the traditional white houses!

Interesting facts about the red carnation

The carnation looks a bit like a red rose, but it is smaller in size with wavier petals. As beautiful as the flower is, the petals are also edible!

Carnations have the sweet fragrance of a light clove-like or nutmeg scent, and they can be made into jams or even used to flavor buttercream frosting or in decoration for cakes! It is an attractive fragrance for certain foods.

Another fun fact about carnations

Also, carnations are one of the secret ingredients (shhh!) used to make the green or yellow French liqueur Chartreuse.

The Carthusian Monks of Grenoble have been making it and guarding their recipe since the 17th century! Oops – well that’s about France. Now, what about the national flower of Spain?

What else does the carnation represent?

Did you know carnations are a common Chinese wedding flower (along with the lotus)? In fact, the Carnation Lotus is a specific dusty pink variety of the carnation, very similar to a Chinese lotus flower. They’re used in various traditions all over the world.

In Europe and the United States, the red carnation is the designated flower given on a first anniversary. Indeed, this national flower of Spain is also the birth flower for those born in January.

The oils of the national flower are used to treat skin irritations, female hormonal imbalances, and sore muscles. I could use some carnation massage oils right about now, what about you?

Why is the red carnation the national flower of Spain?

Why is a red carnation one of the country’s national symbols? Is the national flower a yellow carnation or a bright pinkish-purple? NO! The original natural flower color is, of course, RED!

Because what is Spain known for? Just like the traditions and clichės of the Andalusia region of southern Spain, the bloom is vibrant, passionate, and dancing in the breeze. It’s set against the green stem and leaves, ready to gain admiration wherever it goes.

As you might guess, this most common flower, by the scientific name dianthus caryophyllus, is a part of Spanish culture and is native to the Mediterranean region. It is a most attractive flower widely grown for decorating windows, garlands, and other ornamental purposes.

The national flower is a flamenco dancer

Some people say that when they see carnations, they see the whirling skirts of the flamenco dancers. Exactly! I love this image and can completely see it. What does it remind you of?

Back in the peasants age, the Andalusian gypsies known as flamenco were forced to flee from government bodies and different kingdoms competing in the fourteenth century.

Flamenco dance is Spain’s national dance, so maybe this is one reason it chose the carnation as one of its national symbols.

The red carnations symbolize love, romantic and other heart feeling. Of course, they are also seen as a religious symbol of Christ’s passion.

Yes, the national flower is a symbol of deep love, and the Spanish people often use it to decorate weddings or engagement parties.

Carnations represent a mother’s love so are given on Mother’s Day representing that pure love. Spain is a country with strong feelings about family, and the carnation represents the love and devotion that can thrive in difficult situations.

Where to find this flower symbol

In southern areas closer to the Mediterranean, you’ll see beautiful bright red carnations growing on the traditional white houses. Red carnations are also a prominent feature in flamenco dancing, parades, and other celebrations of the Spanish people.

Finally, there’s nothing more romantic than serenading your lady while holding a red carnation in your mouth or holding these national flowers up to her window. Spanish guitar playing is a must with this scene also, to show the greatest admiration possible for the lady.

How to grow carnations at home

The red carnation is known as el clavel, la flor de España (the flower of Spain). In Spain, the national flower grows in the red soil of the Spanish Mediterranean. However, these flowering plants in their pink, yellow, green, rose, red, and purple are now widely grown around the world.

If you want to grow these blooming beauties from seed, consider the climate of your region. Carnations grown outdoors prefer their native southern areas and Mediterranean climates with lots of sunshine. In the United States, they can be grown in zones 5-8 with care.

How to sow the seeds

To grow this impressive but common national flower at home, plant the carnation seeds indoors 8 weeks before the last frost, or else they won’t flower that same year. Make sure the seedling tray or starter greenhouse has drainage holes to protect from over watering.

You need to sow the seeds 1/8 inch deep and keep their soil moist at 60-70 degrees F for about 14-21 days until you see little carnation sprouts pop up!

A good place to start growing seedlings is in a sunny windowsill or beneath fluorescent plant lights, off for 8 hours at night. Seedlings do not need much fertilizer when they are 3-4 weeks old. However, do feed the seeds using half the strength of an indoor houseplant food.

It’s best to accustom young plants to outdoor conditions by moving them to a sheltered place outside for a week at least. If frost threatens at night, cover or bring the containers indoors so they don’t get hurt from sudden changes of weather!

Tips for planting carnations in the garden

After all danger of frost has passed, transplant the seedlings to the garden. Select a location in full sun with loose and well-drained soil.

When to plant carnations

To plant your flowers/plants on an ideal day, do so during either early morning hours just after sunrise or later afternoon times around 4 pm where you’re less likely to shock them by moving them from one environment into another abruptly.

Plant at least 12 inches apart, in a place where at least they’ll get 4-6 hours of sun a day. Top them with an inch or two of mulch and water as well. The fabulous flowers have a long lasting blooming period and should last from mid-summer to early fall.

Where to buy the national flower of Spain

Have you ever admired carnations? They’re often used for cut flowers and serve as both a bouquet centerpiece and boutonniere. Carnation petals stay fresh for up to two weeks, and are beautiful both in a garden or for indoor decor too!

You can order fresh cut or even artificial red carnations online or in person at a florist near you, which will ship carnations to the buyer’s location. You can also grow them from seed as I detailed above.

What’s the easiest way to get your hands on some nice carnations? Buy a bouquet at your local florist or grocery store. Okay, you talked me into it.

How to draw the flowers of Spain

Do you love to draw flowers to relieve stress? Maybe you want to draw the bloom and foliage of the carnation as a school project. Does Grandma love our most popular flower and need a blooming red carnation on a hand-made birthday card?

I would love for you to draw along with me as I create the national flower of Spain in two-dimensional form, the official flowers of Spain!

First, we will start with the stem, then explore three different types of blooms. Good luck!

The national flower of Spain: the red carnation

The red carnation is the national flower of Spain. It represents Spanish culture in religion, dance, and even bull-running! Whether you enjoy them on a balcony or plant some for yourself at home, we hope you’ll take the time to appreciate these beautiful flowers as they grow this spring and summer season.

So pin one in your hair, draw one, read some more Spain books, then declare your love for all things related to Spain!

The peninsular country has many beautiful places to visit, and I think the National Flower of Spain is one of its great treasures. It helps Spain tell its story, and Spain’s story connects all of us around the world.

I want to say thank you to Spain for its beautiful National Flower. I hope you will enjoy adding this to your travel knowledge, and I know Spain will continue to be a popular place to visit in the future.