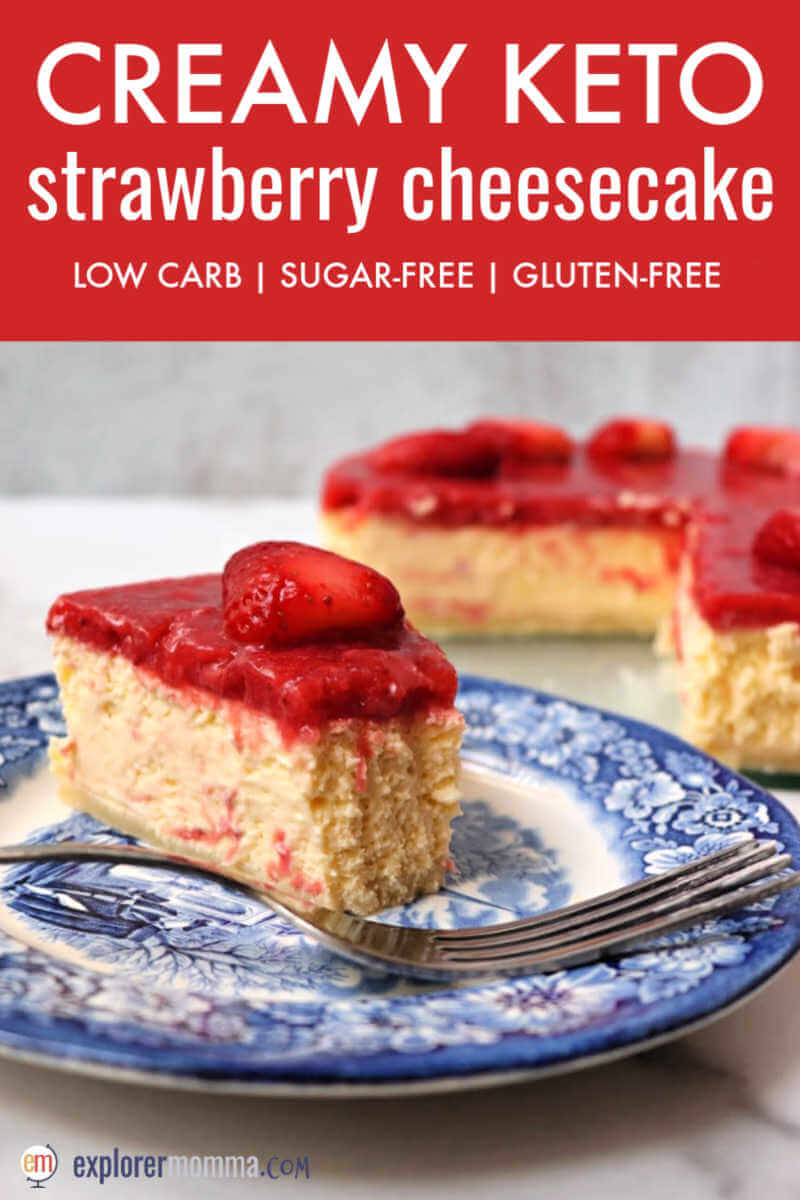 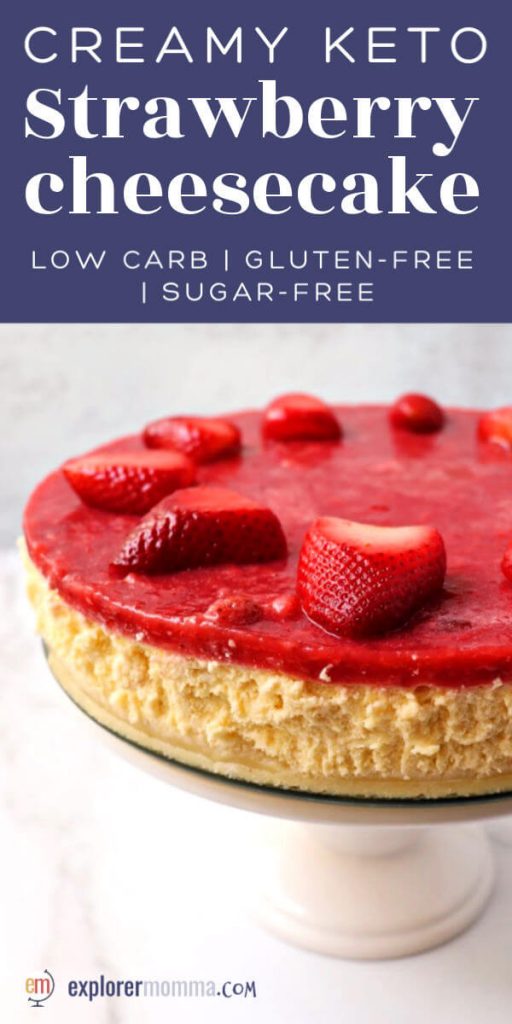 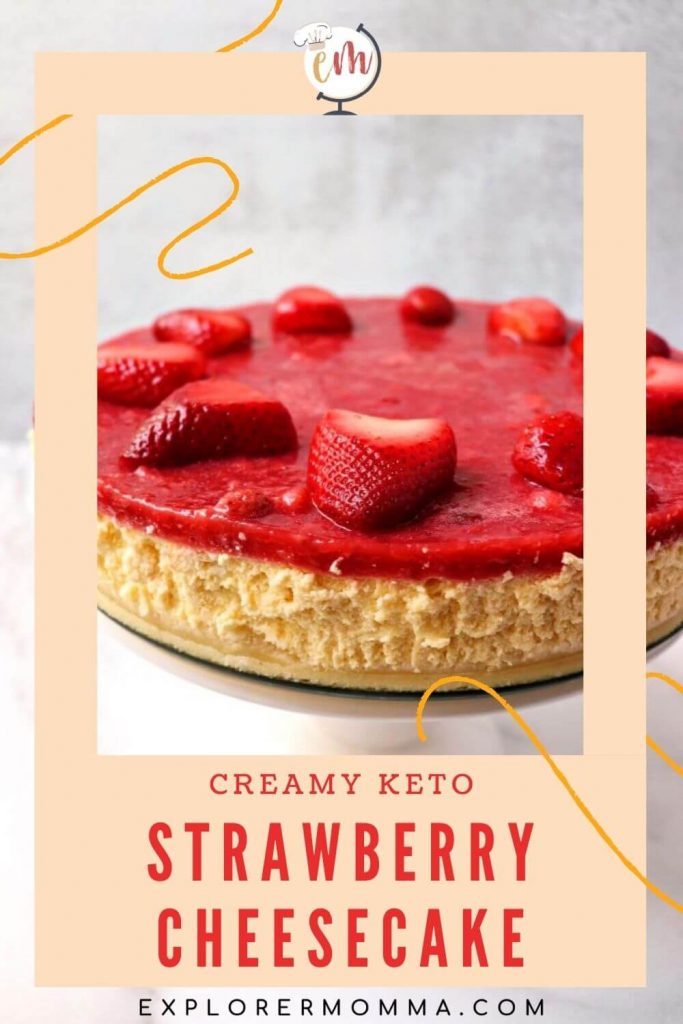 Deliciously creamy keto strawberry cheesecake has a low carb almond flour crust with a bright sugar-free strawberry topping. It may just be a little bit of heaven to your tastebuds.

This post may include Amazon or other affiliate links. As an Amazon Associate I earn from qualifying purchases.

Cheesecake! What does it mean to you? Other than cause your taste buds to start watering.

I love it when a certain food brings back memories.

When I was in college, after every semester my aunt and I would go out to dinner. It became tradition to then order a celebratory piece of cheesecake. We talked about anything and everything and savored the cheesecake.

I look back on that now and realize how lucky I was to have such a supporter and confidant. It was a huge for me at that time to know a special person was rooting me on.

And it all comes back to me…with a piece of cheesecake.

While I think you’ll love my super helpful tips and fun stories, I also realize we are sometimes pressed for time and just need a good recipe!

Scroll down to the bottom of the page for the printable recipe to make it NOW or PIN it here for later!

There are all different kinds of cheesecake, but here are some of the main ones.

A New York cheesecake. Do you know there are all sorts of cheesecake recipes calling themselves New York style cheesecakes, but they’re topped with sauces and flavorings.

Most of the sources I’ve asked (or looked up online), claim Arnold Reuben made the first New York cheesecake recipe, or at least made it famous.

He owned the well-known Turf Restaurant at 49th and Broadway in New York City. Alongside the illustrious Reuben sandwich, he put the New York cheesecake on his menu. Boom! Instant win.

Generally, it’s a rich, dense cheesecake without any extra toppings or fillings. It’s known for its delicious simplicity, a cream cheese base with sour cream or heavy cream. Some say the sour cream helps to keep it creamy as it’s traditionally frozen and served.

This category is for the softer cheesecakes, often with extra toppings, fillings, and crusts.

I have to say this is my favorite cheesecake category and the one in which I’d put this keto strawberry cheesecake recipe. It’s silky and creamy and has a prominent strawberry topping.

Cheesecake made with cheeses other than cream cheese

Of course, you’ll also see mascarpone cheesecakes in Italy. Another one of my favorite desserts ever is a traditional Tiramisu, but that’s for another time.

Another popular cheese to use in a cheesecake is ricotta cheese. Certainly, these can be flavorful dessert choices.

Personally, I’ve never had a Japanese cheesecake, but have been told good things about them.

A Japanese cheesecake is less sweet, lighter, and with less cream cheese than the traditional or New York style cheesecake.

Also called a “cotton cheesecake”, egg whites or cream are whipped up to make it light and airy. Therefore, it has fewer calories and creates a very different experience in your mouth than the other types of cheesecake.

Because you don’t live near a bakery doesn’t mean you have to go without cheesecake.

How to make keto strawberry cheesecake

When you look at the recipe it may sound more difficult than it actually is. Once you break it down in the layers, it’s pretty step by step. It’s silky smooth and oh so worth it!

First of all let’s begin with the crust. Get out all the ingredients, and whisk together the almond flour and powdered sweetener in a medium bowl.

Next, add in the melted butter and mix it all together with a pastry cutter or fork to make coarse crumbs. Then press the mixture evenly into the bottom of a 9-inch springform pan using your hands or the back of a large spoon or bottom of a glass.

Now put the pan in the refrigerator to set. I’ve tried baking the crust, or not chilling it, but found chilling it to be the best method. In chilling and setting it, the crust does not tend to stick to the pan when you’re ready to serve.

First, preheat the oven to 350 degrees Fahrenheit. Then beat the cream cheese in a mixer gently until smooth. Once mixed and it has no lumps, add in the sweetener and mix until combined.

Next, one at a time beat in the eggs and egg yolks, then lastly the vanilla and lemon juice.

What is a water bath?

Most cheesecakes are traditionally baked in the oven in a water bath or bain-marie.

Basically, this just means the springform pan with the cheesecake is placed in the oven in a roasting pan full of hot to boiling water.

That means the sides of the cheesecake are cooked in hot water. Also, it makes the air in the oven more humid.

While, I say it is optional, it really does make the cheesecake super creamy and the perfect texture when cooked. I highly recommend it for an amazing cheesecake.

So, for our purposes, heat a tea kettle full of water on the stove. While that begins to heat and then boil, cover the outside of a 9 or 10-inch springform pan with two layers of heavy aluminum foil.

In my photo you’ll see I used parchment paper as the first layer because my aluminum foil was not wide enough. You’ll want to cover the entire bottom and sides of the springform pan to make it water-tight.

How to bake the keto strawberry cheesecake

Next I like to place it in a large roasting or even a large cake pan before pouring in the cheesecake mixture. Then, pour the cream cheese filling into the chilled base and spread it evenly around the springform pan.

Now put the entire thing in the oven but leave the door open. Only now pour the boiling water into the roasting pan to surround the springform pan.

After that, close the oven and bake the cheesecake for 30-40 minutes or until it’s set yet still with a wobble in the middle.

Do not overbake or you’ll lose the creaminess and end up with a curdled cheesecake, and we don’t want that!

Let it cool for 10-15 minutes then remove from the water bath. Put it in the refrigerator for at least two hours to chill before pouring on the strawberry topping.

Now it’s time for the topping!

First off, heat 16 ounces of organic strawberries in a saucepan on medium-high heat with 1 tablespoon of water.

Next, smash up the berries with a potato masher or the back of a spoon to your desired consistency. That just means to decide if you want large or small berry pieces in your topping.

Once the mixture begins to boil, whisk in the lemon juice and sweetener and lower the heat to a simmer.

Simmer the mixture for about 5 minutes.

Now you have a decision to make. Do you want a strawberry sauce that’s runny or do you want it in a gel that will stay in place on top of the cheesecake?

Personally, I like the gelled form because it’s easier for me when it’s already on top and ready to serve when I need it.

Therefore, if you do want it to gel, sprinkle a half a tablespoon of gelatin powder evenly over the sauce and whisk in briskly. Be sure to choose a quality grass-fed gelatin such as Great Lakes Unflavored Gelatin.

On the other hand, if you prefer a more liquid strawberry sauce to drip down the side, simply omit the gelatin.

Remove the pan from the heat and let the strawberry topping cool to room temperature.

Evenly pour the strawberry sauce over the cheesecake and return it to the refrigerate to set for at least another hour or preferably overnight.

Lastly, unmold from the springform pan and serve to delighted keto friends and family. Garnish with extra half strawberries if you wish.

The keto strawberry cheesecake should keep about a week in the refrigerator or up to a month in the freezer.

What are your favorite flavorings for cheesecake? To be honest, you really can’t go wrong although I haven’t experimented with savory cheesecakes much.

Strawberry is a great fresh summer flavor with cheesecake and one of my favorites. At Christmas I like a white chocolate ginger, and anytime white chocolate raspberry cheesecake is pretty fabulous. I’ll have to work on giving those a keto makeover.

What about you? What are your favorite cheesecake flavors? I’d love for you to put them in the comments!

Please be aware I am not a medical specialist or nutritional professional. On this blog, I share recipes and what works for me. Please do not take anything on this blog as medical advice and always consult with your doctor before starting any diet or exercise program.
I use Myfitnesspal.com to calculate nutrition facts as a courtesy to my readers, and I remove erythritol from the final carb count and net carb count because it does not affect my own blood glucose levels.
This is as accurate as possible, but it’s best to independently calculate nutritional information on your own with the specific ingredients you use.
Free Printable French Valentine Cards
← Previous
Best Ever Keto Broccoli Cheese Soup
Next →
Click here to cancel reply.